The Union League is without a doubt an ideal match for couples interested in a wedding venue located at the heart of Philadelphia, just steps away from City Hall.

Founded in 1862 as a patriotic society to support the Union and the policies of President Abraham Lincoln, The Union League of Philadelphia laid the philosophical foundation of other Union Leagues across a nation torn by civil war. The League has hosted US presidents, heads of state, industrialists, entertainers and dignitaries from around the globe and has proudly supported the American military in each conflict since the Civil War. The Union League continues to be driven by its motto, Amor Patriae Ducit or Love of Country Leads.

Lea and Jeff share in their Love Story that they specifically chose the Union League as their venue because Lea is an avid history buff!

Not only does The Union League have several iconic features like the entrance's spiraling stairs, but their staff is always professional and accommodating for both vendors and couples. CinemaCake is proud to be featured on The Union League's website. Check out our Union League Wedding Sizzle Reel on their page here.

Stephanie and Mauricio lounged in their New York City apartment, smiling ear to ear, while telling us the story about how they met online. "Our relationship will never work because you are an Eagles fan and I’m a Cowboys fan," Mauricio messaged to Stephanie. Stephanie quickly replied, "Well, we can go out on a date and just break up before football season starts." If you think that’s cute, their Love Story only gets better! We strolled around New York City with the couple, hearing about how they met, what they love about each other, and their awesome proposal.

If Stephanie wasn’t already excited enough about the Eagles winning last year’s super bowl, she was about to be in for another surprise. During the Eagles parade, Mauricio was going to pop the question. He was looking for an opportune moment, but couldn’t find the right time to do it. Later that night, after the parade, Stephanie and Mauricio would have dinner with her parents at the Union League, before they headed back to New York. All dressed in her Eagles attire, with family all around, Mauricio got down on one knee and asked Stephanie if she would marry him. With tears of joy filling her eyes, she happily accepted.

"We are, quite literally, speechless. And we love it! You guys are wizards!"

Stephanie and Mauricio were married at the Ballroom at the Ben on February 23, 2019. “Classy flamingo is my style,” Stephanie explained. From her pink shoes, to her flamingo bouquet detailing, to their gold, flamingo embossed invitations, we couldn’t help but agree that “classy flamingo” is the perfect way to describe Stephanie.

It wasn’t just their flamingo wedding details we loved; the vows Stephanie and Mauricio exchanged were beautiful.

I don’t know what I did to have you in my life, but I am, and will continue to forever be grateful that you and I are best friends.

Look at where we are look at where we started. You push me, inspire me, fascinate me, balance, and support me, and for that, I promise to love you endlessly. Now and forever.

Congratulations to Stephanie and Mauricio and go Eagles!

From Prom to Pomme
Behind The Scenes, Love Stories, Wedding Movie Trailers

It was once said that if you love someone, let them go, and if they come back thats how you'll know. This was certainly true for Stefanie and Larry, a couple whose wedding we filmed a little over a year ago. Their wedding was recently featured in The Knot Pennsylvania. From their high school prom to their wedding at Pomme, their love story was just as beautiful as their big day, and we caught it all on film in a love story video. 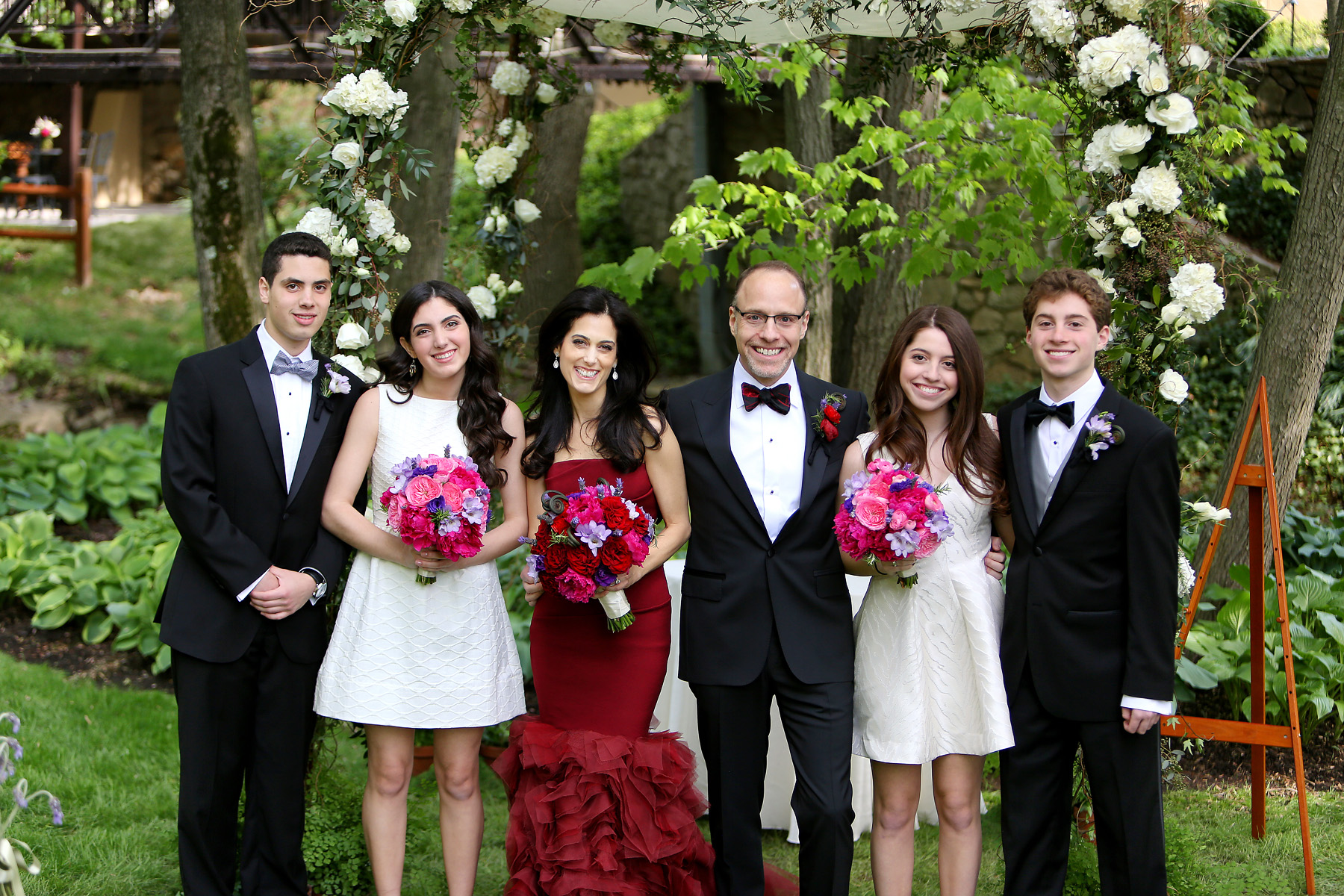 This couple were high school sweethearts. Larry, who is one year older than Stefanie, left to attend college. They broke up and parted ways after two years of dating. Twenty four years later they reconnected on LinkedIn over their shared interest in politics. They picked up right where they left off, this time including their children from previous marriages. Stefanie has two children, Josh and Allie. Larry also has two children, Ethan and Halle. All of their kids are around the same age and formed close friendships, easily blending the two families. And the rest is history. (Photo courtesy of Marie Labbancz)

The wedding ceremony and reception was held at Pomme, a secluded woodland mansion in Radnor, Pennsylvania. Their wedding drew inspiration from many of the family's vacations (where thankfully, according to their love story video, nobody forgot their boarding passes). The trendy rustic, wine country theme came from their trips to Napa Valley and Sonoma, California and Tuscany. They featured deep colors such as lavender, green, and red... right down to the Vera Wang wedding dress.

"We wanted it to feel natural and fresh without being overly rustic," Stefanie said.

The ceremony took place on the lawn, under the chuppah draped with flowers. Both Stefanie and Larry's children walked their parents down the aisle and served as their attendants, completing the theme of celebrating family. The reception was decorated with soft orange lighting, large wooden farm tables, and all the fragrant flowers you can imagine. Stefanie and Larry along with their family and friends ate, laughed, and danced the night away. The perfect ending to a perfect day.

More of the setting, decorations, and all the other details that brought their dream wedding to life can be seen in their trailer below.

Jeff and Lea met the first day of medical school.  Their relationship developed as they became study partners, tennis rivals, and eventually a couple.  Their first date was on the steps of the Art Museum and Jeff proposed in Washington DC...

Ania and Robert met late one night in Rittenhouse Square.  Robert offered Ania his phone number, but she said if it was meant to happen, they would meet again.  Sure enough, they bumped into each other again one night in Center City and have been inseparable ever since...

Stefanie and Larry started dating in high school, but their relationship ended when Larry left for college.  Years later, they reconnected over their shared interest in politics and now Stefanie and her two kids, Josh and Allie, and Larry, along with his children Halle and Ethan, are starting their new family...

We hear incredible stories from our engaged couple's every day.  Stories about how they first met, challenges they overcame together, their proposals, and moments that really defined them as a couple.  Part of what we do at CinemaCake is find these stories and build them into the couple's film, to truly make the final product unique to them.

But what about the day of the wedding?  The details of any couple’s story can get lost in the beauty and traditions of their ceremony and reception and guests may leave not really knowing how the couple actually got to the point of getting married!  That’s where your CinemaCake Love Story comes into play!  Check out the stories of these three CinemaCake couples and the films they shared on the night of their wedding.

During our first meeting, Lea talked about finding a way to share the story of her relationship with Jeff and show how important family is to both of them.  We started talking about shooting a piece that would capture both of the things she mentioned and create an exciting and unique way for them to make an entrance at their reception!  She was thrilled with the idea and right away we started talking about all the places we could film their story.  The day of the shoot, our crew chased them all over the city!  From Jefferson’s Medical school, where they are both students, to their favorite tennis courts, on a bike ride across the Schuylkill River, and finally to the Union League, where we filmed their big reveal.  We sent them a link to their film, and almost immediately both Jeff and Lea responded:

"Phenomenal!  That’s really the only way to put it.  You guys did an unbelievable job with it, we both love it!  Again, really fantastic work, it turned out wonderfully… and man you made us look like legit tennis players, haha!!"- Jeff

“Can’t believe how amazing it is.  I cried the first time I watched it and I keep re-watching it for fun!!  Thank you so much for an amazing job!"- Lea

When Ania and Robert first wrote into our website about having us film their wedding, they gave us a little insight into how they met.  After hearing just a short piece of their story, we knew it was Love Story material! We met with Ania and Robert in Rittenhouse Park, where they first crossed paths, and filmed their interviews around the neighborhood.  Then, we went up to the roof of their apartment building and captured some beautiful footage of their first dance with the Philadelphia skyline as a backdrop.  The footage was truly breathtaking.  We couldn’t wait for them to see the final product and were so excited when we received their response:

"Dave, we are thrilled! We love it and don't want to take anything out.  You guys are the best, we can't wait to see what you'll do for us for our wedding video! Thank you so much for all your hard work!"- Ania and Robert

This Love Story is one that truly stood the test of time!  Stefanie and Larry met while attending high school and started dating.  They were together for two years and Larry took Stefanie to her Senior Prom!  After Larry went off to college, they broke up, each assuming they would never be a big part of the other person’s life again.  24 years later, they reconnected through LinkedIn and picked up right where they left off!  For this Love Story, we not only wanted to hear from the couple, but from their children as well.  Both Larry and Stefanie have 2 children, and it was great to hear from the kids about how they have come together as a family and their excitement for the Stefanie and Larry’s wedding.  This Love Story is packed with great flashback photos, funny moments, and touching stories from Larry, Stefanie, and the kids.  Check it out!

So, if you and your fiancé want to bring the memorable moments of your relationship to the silver screen, contact our studio and we’ll start creating your CinemaCake Love Story Film today!