Doing weddings every weekend can be monotonous, right? Not quite. Every wedding is different. Having been a part of three weddings, back to back to back, it’s clear that everyone has their story and every day is unique. I’d like to share a little bit of what I saw at each one; a peek from behind the lens, if you will. Here are some nice tid-bits that stood out for me, someone who has been a part of over a hundred weddings so far. 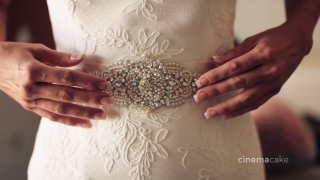 What an awesome couple to experience a Same Day Film with. Having a child in their lives years before marriage, Carrie and Tim certainly understood what family was all about, and that really came through during the day. It was a milestone for the CC team as well, as it was the first Same Day Edit to be done without Dave, something we were all a bit nervous about, but we pulled it off without a hitch. And, whoooooooa, there were plenty of opportunities for things to go wrong.

We had about four locations to cover (one location = easy to get to editor, many locations = nightmare), which we tackled early on by having Jordan edit in the car. “Who’s that guy in the car with you? Is he a shooter?” We were ready for that question, but we were so stealthy that it never came up. The secrecy was only to fulfill Carrie’s request that the SDE be a surprise to everyone, which it was—even Tim didn’t know about it. Everything came together in the end, and Carrie’s big smile as she watched her film was the only validation we needed. 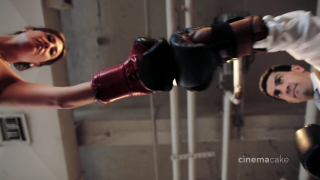 Energy, pure energy. Their vibe was apparent right away, and it helped as the city is big and unforgiving. Working in Philly is one thing (I do that every weekend), but to hike up to NYC and have to chase around newlyweds from Times Square to Chinatown is a horse of a different color. And in this case, that color was red, the color of boxing gloves and quick jabs. Who jumps in the ring with their mate, dons gloves and starts fighting? This couple. Selena and Andre made it insanely fun to shoot because they were VERY much into the photos and film. Obviously.

This date also stands out for me as a great collaboration with CinemaCake and our New York friends, Jonathan Armendariz and Shar Adrias. They don’t shoot for us regularly, but when they do, they’re always solid. And in NYC, their knowledge of the city was beyond helpful.

Janine + Justin
So you’ve seen Goodfellas, right? Imagine a guy just like Ray Liotta, and then take away the ruthless killer part. This guy was a class act, and he wanted to make sure that came through in the single take walkthrough intro that mimicked a scene from Goodfellas. There weren’t boardwalk scenes like in the couple’s trailer where Ray Liotta gave Lorraine Bracco lollipops, but it works for Janine and Justin. It was the kind nature that the couple had and showed for one another that really came through that day.

One Atlantic, sitting on the edge of Atlantic City, provided a beautiful backdrop for a gorgeous day and a sincere couple. I’m not Scorsese, but if he shot wedding films, he’d work for us—all I’m saying.